At present, one of the most prominent lottery games in Europe is EuroMillions, which allows you the opportunity of winning huge prizes. However, if you were to play this game physically, you would not be able to do it because only European retailers have permission to sell it. If you are in South Africa or any part of the world other than Europe, then you do not have to worry as you can also play EuroMillions. As the lottery games have moved to online platforms, many online sites have started offering lottery games and EuroMillions is among them.

These online sites provide you with the opportunity of staying in South Africa or any other part of the world and play lottery games such as EuroMillions and many more. I will now tell you how you can go ahead and guide you on how you can play EuroMillions and other lottery games through online sites. However, before I do that, I will go ahead and share some information about EuroMillions, to increase your knowledge of the game.

EuroMillions and Useful Information Details About it

Just like the rest of the major lottery games, there are primary winning numbers followed by bonus numbers known as “Lucky Star”. While the EuroMillions offers five primary numbers as other major lotteries, it offers two bonus balls instead of the traditional one bonus ball.

The draws for the EuroMillions Lottery take place on Tuesday and Friday, meaning you have a couple of attempts every week to win huge prizes. When it comes to the selection of numbers, you have to choose five primary numbers ranging from 1 to 50. Once you have selected the primary numbers, the next step is to select the Lucky Star numbers. For the Lucky Star numbers, you have the range from 1 to 12 numbers and you need to choose two of them. 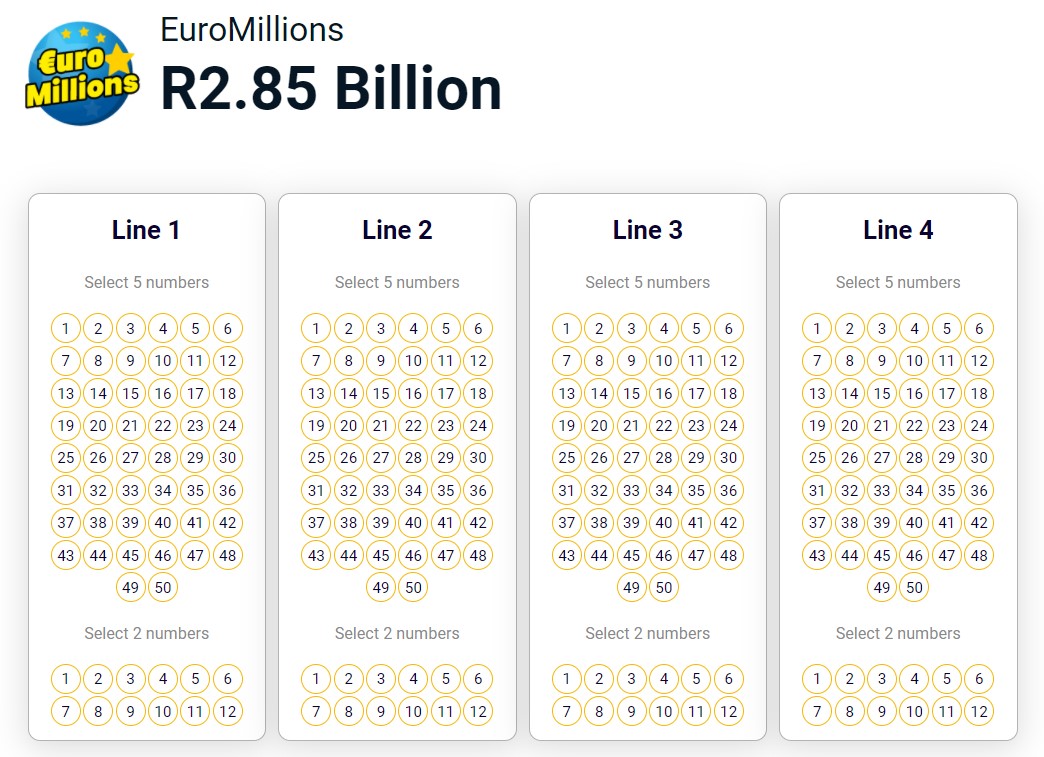 Is it Possible to Play EuroMillions from South Africa?

In the 20th Century or the prior one, it would not have been possible to play lottery games due to lack of technology and accessibility. However, as the lottery world has moved to the internet space in the 21st Century, playing lottery games based in Europe even from South Africa has become possible.

All you need is an internet connection at your home and you are all good to go with the lottery games. If you are ready to believe in the power and approach of the internet, then you have more than one sites on the internet that can help you play lottery games. You can even play EuroMillions even if you are not in Europe through such sites. These sites are actually making it happen for you by letting you play lottery games such as EuroMillions Lottery and giving you the opportunity to win huge prizes.

If you are concerned about the authenticity of such sites, then you can rest assured because several hundreds of thousands of people are already playing games through these sites. The online sites offer you all the options and features while playing lottery games. So even if you are in South Africa, you would have the same feeling as any person based in Europe wanting to play EuroMillions. These sites offer you all the options while playing EuroMillions or other lottery games. Whether you are choosing numbers manually or going for Lucky Dip, letting machines choose random numbers, the online lottery sites offer you everything.

KayaMoola is a Good Choice for Playing EuroMillions from South Africa

While several other lottery sites are offering the facility of playing EuroMillions and other lottery games from South Africa, KayaMoola is offering something more than that. KayaMoola is one of the most advantageous online lottery sites. It not only offers you lottery games from around the world including the EuroMillions, but it also offers you extra benefits and features.

Through KayaMoola, it is extremely convenient and easy to buy digital tickets for the EuroMillions Lottery and other lottery games. When using KayaMoola or any other online lottery, you do not even have to come out of your room or house. All you need to do is log into the website and start purchasing tickets through KayaMoola. The website offers you all options such as purchasing several tickets for the game and adding lines permitted by the EuroMillions or other lottery games on a single ticket.

KayaMoola lets you play EuroMillions Lottery or several other major lotteries the way you would play them if you are buying them from their retailer. It also provides you notifications whether you have won a prize or not from a particular draw or ticket you purchased.

More Benefits of Playing EuroMillions from South Africa through KayaMoola

If you were to form a syndicate on your own, it would take you a lot of time and effort to do so. However, KayaMoola connects you to available syndicates and lets you increase your winning chances. Furthermore, KayaMoola lets you play EuroMillions Lottery alongside other lottery games in a single go.

The lottery gaming interface that EuroMillions offers is much faster and easy to navigate versus other lottery gaming sites in South Africa and around the world. Therefore, you can go ahead and give EuroMillions a try, and you will not regret it. Just like other online lottery game sites, KayaMoola also lets you bet on the numbers that you choose on the games of your choice. KayaMoola does not directly enroll you into lottery games but provides you with the same environment as any EuroMillions Lottery player or any other lottery game. If you do end up winning the prize from the particular draw, the prize money is transferred to your account directly.

When it comes to playing lottery games, the first rule is to have a complete understanding that the lottery games are based on your luck. Whether you have been playing games for a long time or a short term and haven’t won a prize, then do not lose hope. This is exactly how the lottery games work and online lotteries are no different. When playing the lottery games, the price you are paying is very small versus the potential of winning prizes you have. Therefore, stay optimistic and give it a try, and you first try may result in a jackpot prize win.