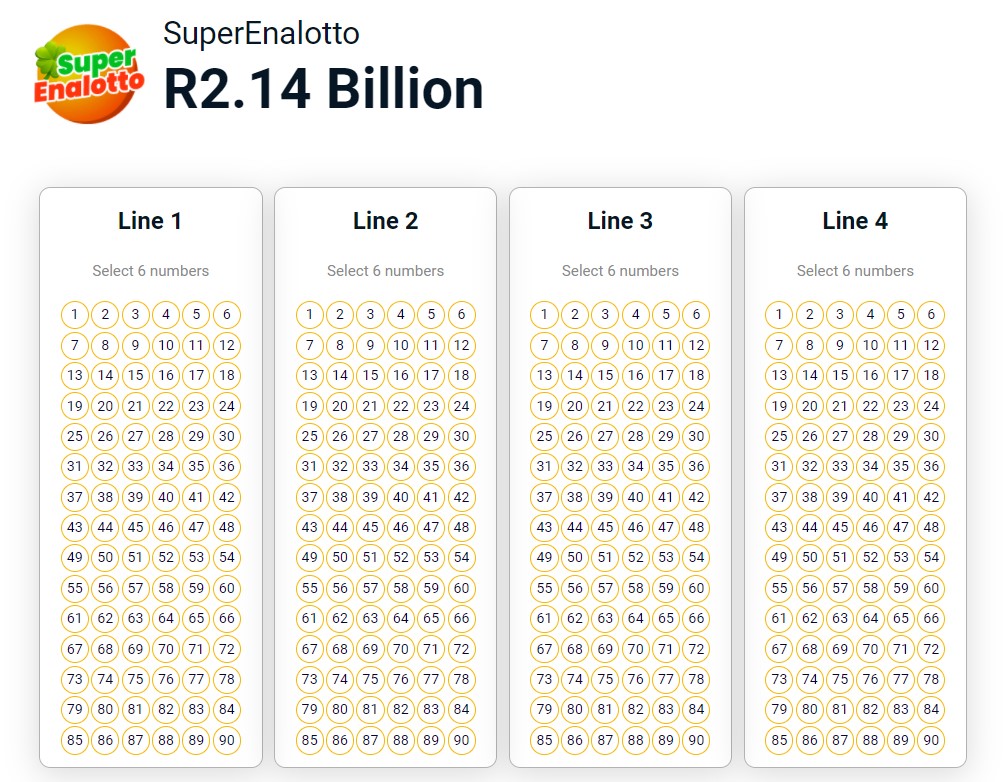 If you are currently on this page, then it means that you are someone who likes to or has the ambition to try his or her luck on lottery games. However, you are afraid that the particular lottery game you wish to play is not available in your country. At present, there are several lottery games around the world that have earned a lot of names for giving out huge lottery prizes. However, most of these games are offered in particular regions, and if you are living in a country such as South Africa, then you may not have access to them.

Among the high-profile lottery games, one of the most prominent ones is the SuperEnalotto Lottery. When it comes to playing the game physically, where you have to purchase a ticket from a store, SuperEnalotto is only available in Italy. However, if you want to play them online from any part of the world, even from South Africa, then you can do it through online lottery games. There are several online lottery game sites providing this service, but there is one in particular that I will talk about. Before I start going about tell you the particular online lottery site, let me share detailed information around SuperEnalotto for your knowledge.

All Important Information You Need About SuperEnalotto

As mentioned earlier, the SuperEnalotto is only available to the players in Italy as it was launched in the European country back in 1997. Since its launch, the SuperEnalotto Lottery has emerged as one of the largest lottery games in Italy. The particular lottery has even gained tremendous popularity in the entire European region. Many people want to gain access to the particular lottery and play it in order to earn huge prizes.

When you play the SuperEnalotto game, the first thing you need to do is select the primary numbers. The range for the primary numbers begins from 1 and goes all the way up to 90. You are required to choose 6 numbers from the particular range. Moreover, you can also choose a SuperStar number, which is used as a special number with every result. The SuperStar acts as the number that can add an extra prize money bonus to the primary prize you win.

Then there is a jolly number that is only linked with the five numbers. In case you match five numbers but not the six primary numbers, the jolly number is then drawn that can compensate you with a little higher prize money. This way, you do not win the jackpot prize but win more than the prize won by matching five numbers.

While choosing the numbers, you can add more than one line on your single ticket in order to increase your winning chances.

If you match 5 primary numbers, plus the jolly number, as well as the SuperStar number, then a minimum €1 million prize is guaranteed on top of the sales made for the particular tier.

If you match 6 primary numbers plus the SuperStar number, then you win a guaranteed €2 million bonus on top of the percentage of sales accumulated and allocated for the particular tier.

If you are wondering if SuperEnalotto is playable from South Africa, then it is definitely possible. Although you won’t find any physical lottery retailers selling tickets for SuperEnalotto outside of Italy, you can still play it through online lottery sites. These sites are very useful as well as advantageous when it comes to playing SuperEnalotto Lottery or any other major lottery from around the globe. You need to keep in mind that you are not directly playing SuperEnalotto or other lotteries through these online sites. Instead, you are getting through them, but the environment, the options, and the prizes are the same as the respective lotteries.

These lotteries are highly secure and give you the same experience as walking into a shop and purchasing lottery tickets from there. These sites even help you play games from South Africa and if you are concerned about the legitimacy of the sites, then rest assured as thousands of people are already playing through these sites. These sites offer you all the playing options as well as the prizes. They even notify you if you have won prize money or not.

If you are planning to go for the SuperEnaLotto or any other lottery games from South Africa, then you should try KayaMoola. It is also an online site that lets you play lottery games such as SuperEnalotto and many more without having to leave your house. It provides you with all the convenience while choosing the game, selecting the lines, and be notified of the draw results. It is known for being one of the most prominent lottery sites that are providing such services.

However, the services KayaMoola offers are unique, very easy to grasp, well-laid out, and convenient while using. Apart from offering similar services as other online lottery sites, KayaMoola has more to offer and add from its end. So I will be covering them in the section below for your knowledge and better understanding.

Some of the major benefits KayaMoola offers include you being able to play lottery games even the SuperEnalotto with a syndicate. The syndicate means you are playing with a group and if any member wins a prize, the prize money is split equally among all of the group members. In addition to the syndicate, the KayaMoola Lottery also offers you the chance to play lotteries in a combination. This means that more than one lottery game can be played through KayaMoola in a single go.

I would completely understand if you are concerned about playing lottery games through an online platform. Almost anyone who has not done something online in the past, especially when it involves money, would be concerned about doing that. However, there is always the first time in doing anything. Just like you, there are millions of people with the same concern until they went ahead and gave it a shot. There are chances the players are still waiting for a win, but the lotteries are a game of luck. It is highly likely that you may end up winning a prize while they are still waiting for one.